The film ‘Singin’ in the rain’ is one of my favourite references that I found online. And the famous song for the film (which is above) captures a lively and happy emotion in his walk and dancing. The character is in his own world, after he has been kissed by the love interest – what is nice about his walk (at the beginning) is it is so confident and bold. He is so happy that nothing could ruin his moment of joy – including the rain (he puts down his umbrella and continues expressing himself through dance). The steps he takes during his walk are wide and his arms rotate very far forward as he is literally bouncing/ striding with the music. The walk feels happy and full of energy. Other than the walk it is nice to see within the dance that there are certain moves and ‘walks’ that I can use as reference or to inspire my own walk. I really like the way that the dance builds up to the end when he begins to jump wildly in a puddle – when a policemen sees him he jumps out of his own world and realizes how he may seems and so hurries away – which is actually similar to the idea that I am doing. Its nice to watch how he tries to regain his normality and then hurries – still happy away. The music that accompanies the scene gives the walk the right bounce or edge. Although this scene is ultimately a created as a dance sequence it is perfect reference for my scene where the girl is dancing/ singing down the street walk cycle.  Lastly to add this is a man however it still is relevant to watch the way he moves and expresses his own dance.

Above is another scene from ‘Singin’ in the Rain’, – (there are numerous scenes that I have looked at but these are just a few I feel I must mention.) The particular walk above, has been created as part of the dance number – although the walk is not performed by a female (which is my intended character) I still wanted to include it. It shows how a walk can be playful – I like how the legs are especially rotating with the hips. This clip is funny and carefree just as I hope my first walk will be. The use of arms and legs together create a body full of rhythm The walk id different as the action of  the body is quite close (I mean the legs don’t open far and the hands stay close in the body) even though it still has so much life and fun.

Above is a GIF that I stumbled across on Tumblr when research ‘Singin’ in the rain.’ But just watch the female, her strut is so powerful, how her legs cross just before she turns to the man who is ‘checking her out’ and pushes her arm up.  I just am really in love with the way she walks in such a feminine way – the legs just seem to be the focus (legs of a woman) that we all look here and she quickly puts them down as she walks. For the length she is walking as well she seems to move her legs quite abit as females tend to take more steps where men have longer strides.

Dirty Dancing, an example of how a young woman could walk with a ‘dance’. The video above shows how the main character, is practicing her dance routine, however we see a lot of her walking towards the camera with a sway in her hips and movement in her legs. She moves her knees a lot forward and her whole body is turning with her. The actress tends to bob her head and down which is a good shows of how her character is thinking about the steps and the pace of music. As she walks up the stairs we have a good view of her bum and hips swaying and driving the body from side to side.Its a really nice reference as it just shows how a female body can move – I really like one of the last examples on the bridge where she uses her whole body including her arms just to express her new found rhythm. Towards the end of the clip she becomes ore confident with the movements and so lets go even more – her lower leg kicks back higher and she bounces more – the dance is not as rigid. At the very end she even pushes her shoulders up and down (left and right) dancing with her upper body as she moves. Lastly she is dancing to herself, there is no audience (other than us) watching and so she can just let go and be free with how she moves.

Funny Face has this one scene, where Audrey Hepburn goes to Paris (from a book seller to a model) decides to ‘express’ herself to the co-star through the famous French Expressionist dance. They are in this dark French jazz club – the whole scene wonderfully shows a variety of shapes and moves performed by Hepburn. (Below I’ve included some photographs of her body poses. The whole scene just has very strange dance moves that are used just to express a person – to be free and make what ever comes to mind (of course this dance has been planned) it still has a lovely atmosphere – furthermore at the start of the film Audrey Hepburn’s character is a rather plain book seller who life isn’t exciting and by the end she has fully changed into a more lively and expressive person. This video is mostly a dance – I just wanted to include how the poses and change of pose is effected by the rhythm – I also just like how she makes different movements (from big to small) – she does take some bouncy walk – at 2:02 – 2:08 she is bent down but still walking to the beat of the music.

These boots are made for walkin’ and that’s just what they do! The music video that accompanies this famous song, shows many women (you guessed it) walking in their boots. The very beginning of the video just shows several legs walking past the camera in a slow manner to the music (- move – pause – move – pause with the beat of the music.) As we progress through the video they tempo increases and the dancers and Nancy Sinatra begin to move a lot more. At the very end of the video the group of girls walk forward past the camera in this quite funny walk. The slow walk that is used in this video is like a tease to the ‘men’ she is singing the song too, a slow and sexual walk – we can tell from the lack of clothes on her bare legs she and the dancers are trying to tease and to show power with their boot walking. At the end they seem to let go and they do this dance where they twist there hips and legs (watch to get a better understanding – 2:20) and you instantly feel the release as they give off more energy and bounce in their walk as the song finishes.

Above is a GIF from the film Grease 2, (during a song called ‘Cool rider’) – I’ve included this particular snippet as she does a little dance walk from one side of the room. I like how Michelle Pfeiffer is able to do so much with her body in the couple of seconds of this GIF. She is able to display the attitude of her character. Her whole body is feeling the music – she is alone and expresses what she wants in a partner (‘cool rider’) – the very beginning where she crosses her legs and turns her head is really nice and gives her a sway of hips – a lot slower than later parts of the footage. Her head moves around a lot as she expresses the lyrics she is singing – its like an extra shot of attitude. So I should think about how the head of my character could also do this. I also like the use of arms that stay above her head and then shake below here.

Many will know the walk made during the ‘Frozen – Let it go’ where Elsa is transformed completely. I decided to include this walk within my dance research – although it isn’t a dance, it does project such confidence and enthusiasm. I really like how the anticipation is built by her left arm crossing over her body and then lifting both arms up to reaveal the transformation – but in the case of the walk, the hips which sway side to side creating a very sexy/ sassy walk full of power and confidence in herself (which until this scene she felt she had to hide and be controlled. Even though she has ‘let go’ she is still very elegant – she is open and showing her power to herself and everyone around. This walk is just so perfect for this moment of the film. When creating my walk cycle I want to try and think about how a pose – movement of arms projects the personality of the character or if moving the arms up will reveal more of the legs or hips of the young woman.

The GIF above is a walk cycle I found online – it is a depiction of Greta Garbo one of the leading actresses of this time. I had to include it as soon as I saw it because of the exaggeration in her hips and rotation of her chest – it turns so much we can see her back. Another thing which is unusual is that she seems to push out her stomach to make a arch of the back. Her head however stays in one position – which actually makes her appear to be quite stuck up – or elegant. She walks slowly with poise – and although her arms stay in one position we still feel movement from them as they are pushes forward with the body. 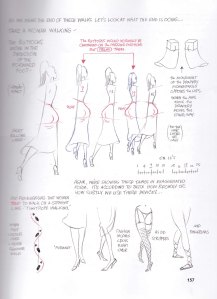 I used Eadward Muybridge motion photography, of females walking and Richard Williams animation survival kit, to research into walk cycles and a reference for me to understand how they could be animated.