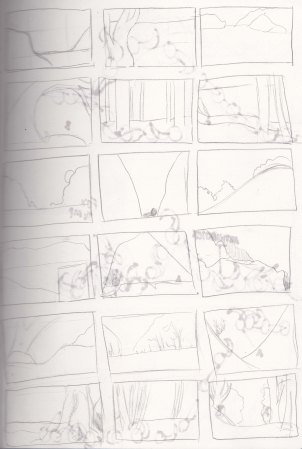 I begin creating my background by first making many thumbnails. I feel that it is the best way for me to put down as many ideas and to just experiment with what works and what doesn’t. They were just quickly done, rough. After this I then selected some that really stood out to me and drew them with black and grey charcoal (like above) to get a sense of the tone before committing to the colour (which I hasn’t chosen just yet.) I really like working with this medium as it enabled me the freedom to draw over mistakes and rework until it was just right. It also gave the original thumbnails more depth with tone and would improve some the concepts. After this I then selected the best and moved onto the colour pallet. In the end I was stuck between the blue and orange and the dark greens. The first, was more abstract and played around with the colour of the rig (creating a world where he belong) and being a bit more abstract as the ideas I had were more shape and abstract too. However the dark greens were based of woodlands where a creature such as my ball and tail may reside. So from here I used the different tones of colour to see how it could change the ideas from the black and white drawings. I really like the outcome – although it is messy you can clearly see the use of colour bright and bold. I then decided on my final piece from what I felt was the best outcome of the colour paintings.

Above are some more visuals from the Disney’s Beauty and the Beast – I just included these as they are able to capture the dark setting of the beast’s castle and location – the whole layout is dark and intimidating. 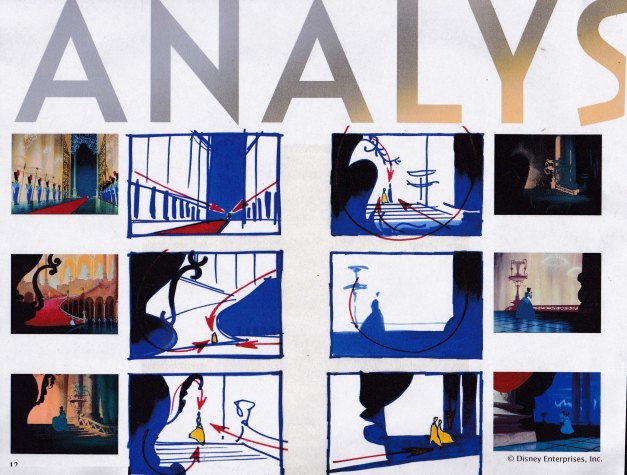 Alfred Hitchcock remains the master of suspense, Psycho and here one of his most famous films we can see his real genius. The first photograph above shows the power of the center. The eye has been placed in the middle of the screen (which goes against the rule of thirds.) However this is because the our attention should be fixed on her dead glare – in addiction the eye will change into a show plug drain (in a cut) that has been clearly thought out. We watch the blood and water swirl down the plug, is this a metaphor for her life literally goes down the drain?  The acting in this scene is very over exaggerated to reflect the adverts of this time. They were glamorous and sexual. Furthermore is this trying to reflect the strange sexual desire that the killer has on the victim – do we see this because we are meant to think about her. The last image of the water curtain is a very good example of the rule of thirds. The character has been placed on the third right of the screen this is to leave this space in which the killer will appear. Leaving this space will also create suspense to the audience as they are anticipating for the killer to appear. When they do we are greeted with this menacing figure. The rule of thirds are used to reveal the killer and build anticipation – then zoom up .

We looked at this video in class. What I like most about this short animation – aside from the story, is the continuous camera tracking. It is always moving. This gives the animation further symbolism of hoe time will continue to pass and how  things can change. Furthermore because it is about a farmer and his entire life the use of camera is good for expressing time moving forward without have to cut different sequences. Another element I must mention is the animation style – the background two – the whole popup, 3D, paper like looks superb and fits in with the subject matter.